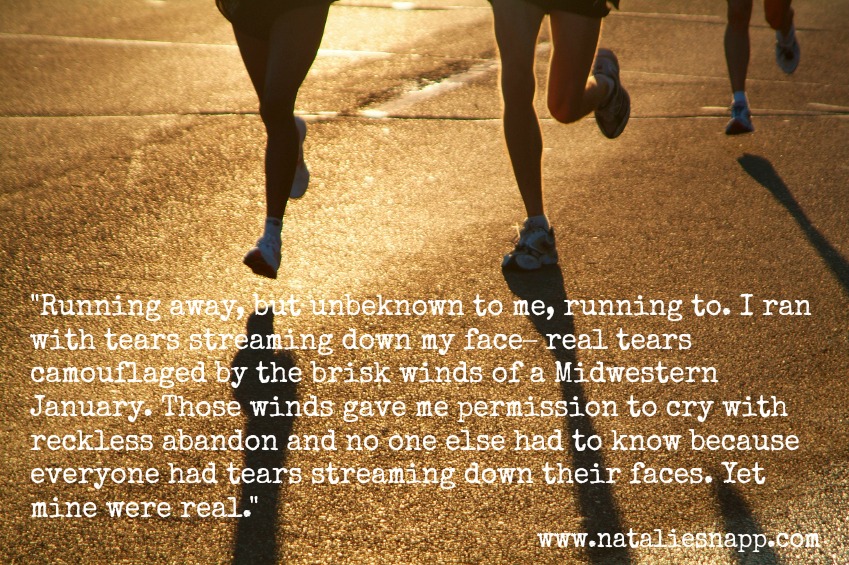 FYI – this is a series. If you want to start from the beginning, you can go here.

Might I invite you to head over to the Facebook page here? We’re continuing our house-warming party over there. All kinds of fun goodies will be given away each day this week so you won’t want to miss!

Before we roll into the next chapter, the one where I meet Jason and we live happily-ever-after (snort), we need to go through a few details that make this whole story worth telling.

Let’s back the truck up a bit to January – the month in which I separated from my ex-husband.

I was 27 years old and scared out of my gourd. This was absolutely not how I envisioned my life going whatsoever.

Towards the end of January (2001), I woke-up and thought to myself, “I’m going to train for the mini-marathon.”

This may not sound earth-shattering to you; however, you should know I had never been much of a runner.

As in, I hated running.

The running group I was encouraged to join met at a local mega-church. I thought nothing of it and signed up.

I registered to run the Indianapolis 500 Festival Mini Marathon in May and took-off.

Turns out, it was the most perfect therapy a girl could imagine.

During the dreadful, bone-chilling months of an Indiana winter, like Forrest Gump, I just started running.

Running away, but unbeknown to me, running to. I ran with tears streaming down my face– real tears camouflaged by the brisk winds of a Midwestern January. Those winds gave me permission to cry with reckless abandon and no one else had to know because everyone had tears streaming down their faces. Yet mine were real.

Only God and I knew the origin of those tears and the authentically-hurting, searing-with-pain heart that produced them.

I was one confused girl, turned upside-down.

I didn’t make the greatest of choices. I started to date someone in my running group before I even filed for divorce. The weekends were party-time. I spent money I didn’t have because I thought those things might somehow fill the mammoth-sized hole eating away my heart. I was on a runaway train. Literally.

But then there was a particularly rough day and I found myself lacing up my running shoes, the predictable tears streaming down my cheeks even before I could get outside.

You don’t experience a divorce and a death within a month of one another and not wonder if there’s something happening in the spiritual realm.

My curiosity was piqued about God and His ways and who was Jesus anyway?

But before I could even go there, I had some stuff to get off my chest.

As I stood in the living room of my parent’s home, I slide down the wall in tears.

“Why?! Why, God? Why?!,” I demanded. “If you are so good and so faithful and so wonderful, then why on earth do I feel like your red-headed stepchild?” (Pardon the expression. I actually think red hair is beautiful.)

I did some pretty serious yelling. I cussed. I threw my other running shoe across the room.

I was like Jacob who wrestled an angel all night long – except I was wrestling God.

After an hour or so of ranting and raving, I quieted. I sat in the thickness of it all, unsure of where to go or even what to do.

I said some pretty horrible things to God and I wasn’t sure if a lightning bolt would emerge from the sky and take me right then and there to the pits of hell once I stood-up.

I walked across the room and retrieved the shoe I had thrown. As I was lacing it up, I remembered a CD my aunt had given me a few weeks prior.

I dismissed it when it was given to me because I thought Christian music was a little too syrupy for me.

But something (ha) told me to find it, stick it in my Discman (Seriously. Can you believe we used to run with CD players on our arms?) and go.

And the seeds that had been planted during my youth began to sprout . . .